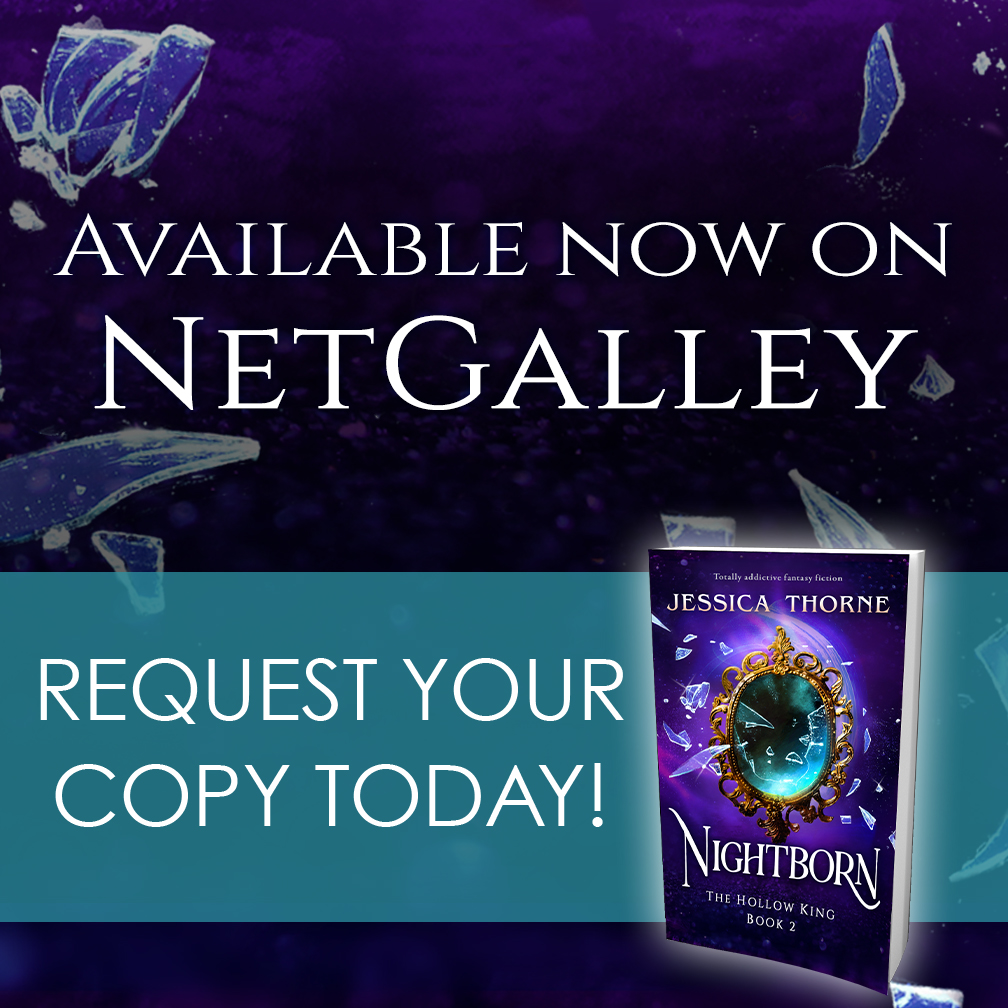 Want a recap of the Dubh Linn series? Wondering if it’s for you? Here’s a spoiler free review of A Crack in Everything, A Hollow in the Hills and A Darkness at the End from Aoife at Fred Weasley Died Laughing on YouTube.

Also just a reminder that I will be at TitanCon next weekend, 30th September – 2nd October, in the Wellington Park Hotel in Belfast. 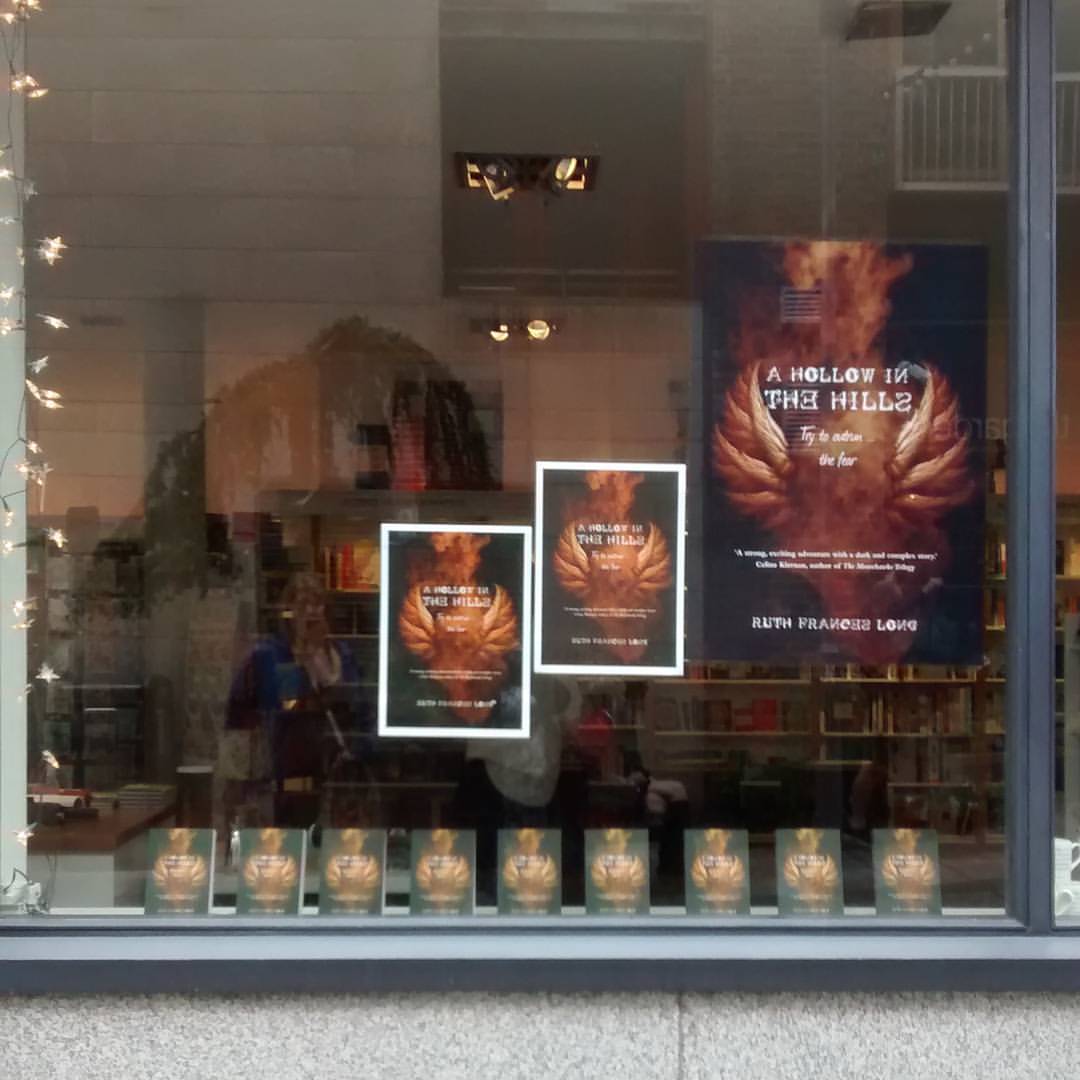 We had a wonderful evening on Wednesday. Thank you to everyone who came along or send good wishes. And thank you especially to Bob and the staff of The Gutter Bookshop for putting on such an amazing night. 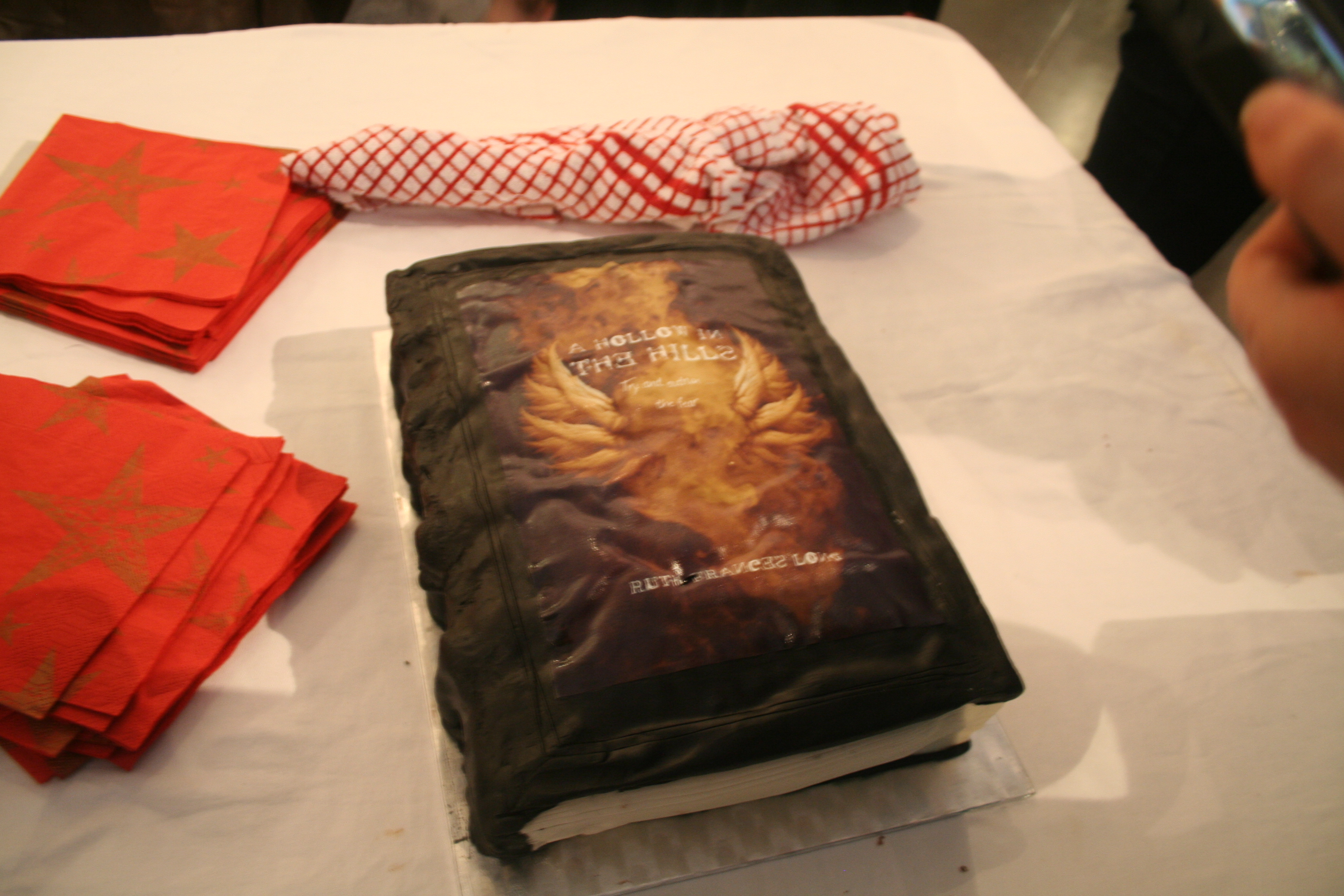 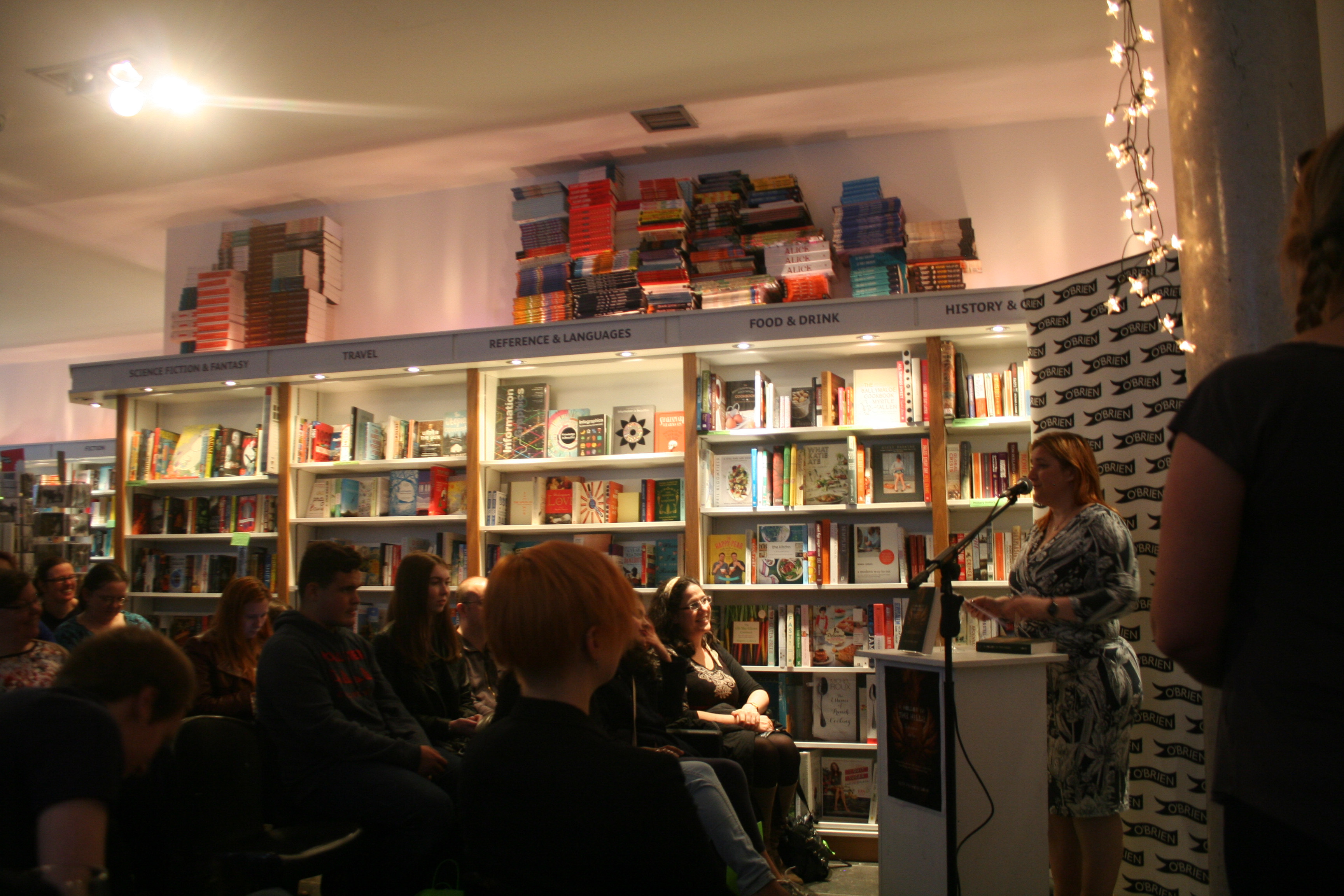 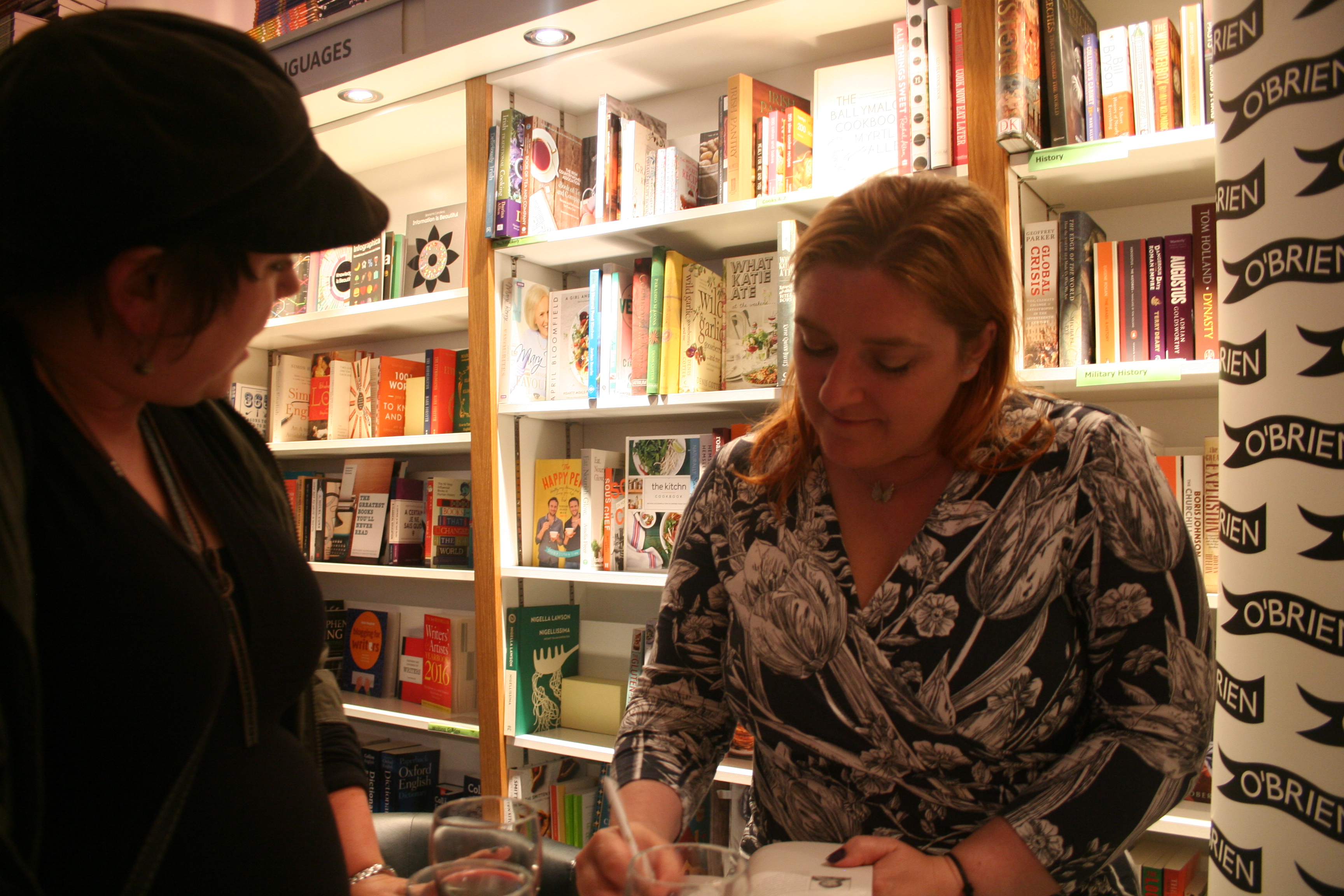 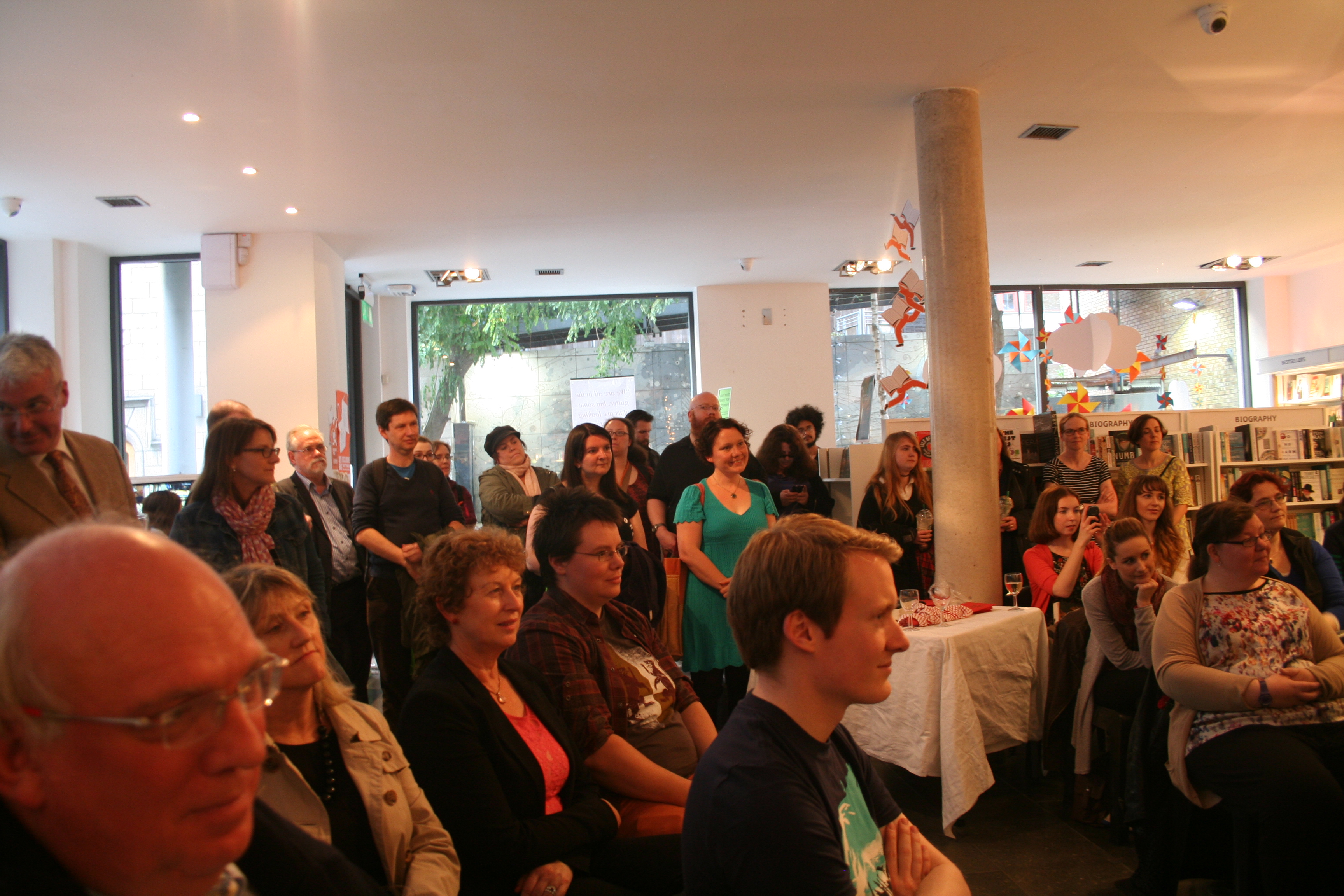 Meanwhile, over on Goodreads, The O’Brien Press are giving away three copies of A Hollow in the Hills. You can enter here.

And in their review of A Hollow in the Hills Parents in Touch said ‘Brilliantly drawn characters & a tightly knit plot combine to make an exhilarating read.’

Can you tell I’m liking the video reviews? You guys are awesome!

Thanks you so much and I’m so glad you both enjoyed, and “got” the story I wanted to tell.

In other news Epic Con 5, which I attended this weekend as a guest was wonderful fun. Myself, Celine Kiernan, Peadar Ó Guilín and Deirdre Thornton talked about all sorts of things — from editors to superheroes, from getting published in/from Ireland to Irish mythology. And we mostly stuck to the topics. Mostly…

Hope everyone had as much fun as I did. Thanks to all the organizers and attendees.

And on Friday night was the Pen Ireland dinner, which was fabulous in so many ways. I got to meet lovely people and hang out in swish surroundings wearing a posh frock. What more could I want?

So now it’s back to life, back to reality, and back to the writer’s cave…

Shhh, I am not really here. I am working very hard. I promise.

But I had to post about this super review for The Treachery of Beautiful Things which I came across this morning from Beauty, Books & Ramblings. It comes in both Spoiler free and Spoiler-ific varieties so you can take you pick, but go and look. I particularly like

With beautiful world-building, fascinating characters, and ancient lore intricately and flawlessly woven into the story, The Treachery of Beautiful Things is without a doubt one of the best books I have ever read

I will look at it sparkle all day and smile.

In other news – I will be at Epic-Con in Maynooth on the 23rd & 24th of February, and of course at Octocon in October. I hope to be in some other places too.

I have no other news. The Ninja puppy and the Patchwork Cat continue their covert war of attrition.

And I am writing. Something new. I think. Look, there was this plot bunny, sitting there all on its own. It was so pretty. So I went over to it. AND A WHOLE MOB OF PLOT BUNNIES ATTACKED ME!

It’s so shiny and new though. SO SHINY.

Back under cover I go. Talk soon.

I’ve been very quiet of late which is usually ominous. But in this case it’s been a mixture of being not terribly well, and having some edits on the Space Opera.* Which might not actually be a Space Opera anymore (Planetary romance? Science Fantasy? Scientific Romance?).

in which we talk about a lot of things. A LOT OF THINGS! LOTS!

Enjoy. 45 minutes or so of it. Just to warn you in advance. Also we had some sound problems. And my voice sounds weird!!!

I also read a wonderful review of The Treachery of Beautiful Things from Writer of Wrongs.

“Exquisite, enchanting, magical… this folktale world is truly worth submerging in.”

Enter to win it and others on the site, but do it quickly. 😀

Back into the writer cave/sick bed I go.

Check out the super Glitterature review from Elle Fowler

“If you are a fan of magical books; of Narnia, or Alice in Wonderland, then you will love this book! I finished this book in one sitting, and was so entranced by it that I didn’t want it to end – ever. I highly recommend this book to any age reader. But be prepared to be sucked in… I got so lost in this world that I forgot about my own until it was over!”

The Treachery of Beautiful Things has been getting some lovely reviews. Which makes me very happy. The paranoia of a writer (this writer anyway) is such that it doesn’t matter that you write something, polish, have other people edit is, polish it, sell it etc. That all kind of pales when someone who doesn’t HAVE to be nice to you or doesn’t have an interest in the book, or indeed any contact with you at all, tells not you, but people in general that they like it. That is such a rush.

And makes me slightly terrified, but that’s my own problem.

Reviews are funny beasts. (NOT REVIEWERS, I NEVER SAID THAT). Because I believe a book needs to stand on its own for the reader. I studied English Lit in college with a firm ethos that the reader brings things to the reading experience that the writer perhaps never intended to be there (and with my mental insertion of relationships into otherwise relationshipless stories I know that’s true). Reading is a subjective thing. What works for one person will not work for another. And the writer… well… once a book is finished and out in the world I kind of imagine it skipping off with no more than a backwards glance at me. A bit like the cat. Off to the person willing to carry on loving and feeding it with their imagination. A review is really something for the person writing the review. It’s their expression of what they liked or didn’t like in a book.

Coming from the Sci-Fi & Fantasy critique boards that I first found when I started writing seriously, I learned (not through direct experience thank goodness) that it did no one any good to argue with critiques. Slightly different there because in that case of critiques they are written with the author in mind. Most of them helped a lot. Some didn’t. Some exposed problems that actually did lie with the reader rather than the piece of writing. Luckily the people who ran these boards were generally very quick to stop things becoming unpleasant. But the fact remains and was drummed into me there too. Books are out there on their own. I don’t want to rake up all the bru-ha-ha of earlier this year but yeah. Books gotta run free as the Patchwork Cat err maybe not that.

But it also means I sometimes find it hard to poke my head up at all, even to say thanks for a good review. I deliberate about clicking “like” or retweeting something, let alone replying unless I’m named in the tweet. (Although I did this morning. Yay me!) So I will say it here. Thank you for reading my book, thank you for reviewing my book. If you liked it and gave it a good review, awesome. Thanks again.  *danceofjoy* If you didn’t like it, well, I’m sad it didn’t work for you but thank you all the same for giving it a chance.

If you’re interested the reviews are on Goodreads and the one from this morning is at Simply Books as well.

It’s that time of year when suddenly everything jumps on me at once! Or maybe I need to learn to say “no” once in a while… Nah!!!

So up and coming events are as follows:

YALitChat Live Chat with ME!!!!  3pm EST (which is 8pm GMT) – 29th Feb, I’ll be talking about The Treachery of Beautiful Things, why I wrote it, the path to publication, answering questions, doing a giveaway and hopefully a super secret sneak preview! Now I just have to talk very sweetly to my publishers… *flutters eyelashes*… and that giveaway? You could win a signed ARC! this for a book that doesn’t come out until August!

Plans are also afoot for other events such as…

Writers long weekend in Wexford. Batton down your hatches Wexford and possibly even lock up your sons. Depends on who is going to be there.

Something in Wicklow? Oooo mysterious….

July ROADTRIP to the RNA Conference in Penrith with Jane Travers, she of TweetTreats. I hope she’s bringing the snacks.
A Libraryland week in Prague. Maybe. Its a bit daunting.

And HOLIDAYS…. right after my book comes out. Maybe could have planned that better. Or could I? Maybe collapsing after the launch is the best idea I’ve had so far.

Not forgetting Octocon in October!

And this just in, a 4 Nymph review for The Wolf’s Destiny from Literary Nymphs Reviews

“plenty of twists and turns in this entertaining and complicated story.”

Delighted to get home this afternoon to find a lovely review of Songs of the Wolf at the super Hi-Ex! Blog.

Songs of the Wolf is available directly from Samhain’s new online shop, Amazon.com or Amazon.co.uk, Book Depository, and at all good bookshops.