In the midst of all the Christmas chaos, we went for a walk in a local park and came across the fairy tree. And what a fairy tree…

Any wonder there’s inspiration everywhere when you can find things like this, in the middle of a forest. Just because…

Hope everyone had a great day yesterday.

Today, I’m taking part in Authors Against Bullying (#AuthorsAgainstBullying), having seen Mandy M. Roth talking about it on Twitter. The following post is about my experiences and how I got past them. The post may contain some triggerish things. Just to warn you. Many years later, when I described this to some friends at a writing conference, I suddenly found myself surrounded by shocked and silent faces. Oops. END_OF_DOCUMENT_TOKEN_TO_BE_REPLACED

This weekend is Octocon weekend! The full timetable is here. And general details here.  Liz Williams is GOH and a host of wonderful guests including C.E. Murphy, Celine Kiernan, Oisín McGann, Michael Carroll and me!

This is what I’ll be up to: (busy busy busy)

11am Room 101 – putting away all those SFFH tropes

1pm – Realistic Relationships in SFF – What makes for a realistic relationship, and does a different world change what is realistic in a relationship?

3pm – LGBTQ in YA – What is the impact of having LGBTQ characters in Young Adult Books? What are the possible
pitfalls?

6pm – What does the term strong female character actually mean? – We use the term all the time, but there seems to be a lot of disagreement as to what is and is not a “Strong Female Character”

Noon – Why so violent? – Why do so many stories resort to violence? Surely we can all just get along

5pm – Is there space for religion in Science Fiction? – Some see science as being about facts and figures, and believe that science fiction shouldn’t include relgion. We hope to explore these ideas.

I always have an awesome time at Octocon. (And collapse in a heap afterwards). But don’t forget that there is also the Friday night welcome drinks and the Dead Dog party on Monday!

Copies of The Treachery of Beautiful Things, Soul Fire, The Scroll Thief and Songs of the Wolf will be available in the Dealers room.

Come and say hello if you’re there. And come to the reading so I’m not talking to an empty room! Pleeeeeeease!

I’m a little late writing this one up for a number of reasons, but they basically boil down to lots to do and no energy to do it with. Plus finishing my WiP, the Space Opera. Well, now that has gone off to my wonderful critters, I can’t put blogging off any more, can I?

Titancon was fantastic fun. So well run and entertaining for all of us. We had a ball. One of the really awesome thing was that Leigh Bardugo (author of SHADOW AND BONE) and Joanna Volpe from New Leaf Literary were there and we got to hang out. I have photos, which are all slightly wobbly as my camera decided to play up.

So first, on Friday night, we had readings in McHughs as part of Culture Night Belfast

Titancon was Saturday. We had panels on Romance in SFF, on becoming a professional author, on working in the Internet age. We met people from the TV show, A Game of Thrones. We had lots of fun and a lovely lunch.

Some of the encounters were pretty action packed. (that’s why its blurry, honest!)

Many thanks to Miltos and Johannah!

A great day was had by all. And here is a wobbly picture of Joanna, Leigh and myself with the Game of Thrones banners.

We stayed for the Masquerade, which was fab and then the next day we decided to go to the Giant’s Causeway, little knowing we would be stalked by the Game of Thrones bus tour!

The Causeway was fantastic. I’ve never been before and always wanted to. Here’s a slideshow of some of my photos (my camera suspiciously decided to cooperate once the con was over!)

The countdown is on to the book launch. My brain has switched into its usual stress management mode – BAKE ALL THE THINGS!

Free and Everyone welcome. Encouraged even.

There will be cake. Just saying.

The book will be launched by the wonderful and talented, not to mention award winning Celine Kiernan.

There should be photos (if I charge my camera and find a photographer). And there might be wine. (*ahem*)

So come one, come all to the Gutter Bookshop tomorrow evening and see what happens.

The Treachery of Beautiful Things

and your local bookshop!!!

So here is the by now photo heavy “what I did on my summer holidays” post. I’m splitting them up into sections with short slideshows so its easier to skip if you want to. Please forgive my typos. I’m tired, it’s been a long post. Skip what you need to.

END_OF_DOCUMENT_TOKEN_TO_BE_REPLACED

Back home again after my library conference in Prague which went very well. Although I do appear to be the one person to visit Prague and come away without seeing the Charles Bridge or the Astronomical clock. But hey, there are at least two reasons to go back. Actually I have LOTS of reasons to go back. And being that we were there as a group of specialist librarians on tour (as it were – herding cats), we got to see some rather special stuff at a lot closer range than many people would. Things like this:

END_OF_DOCUMENT_TOKEN_TO_BE_REPLACED

So this is a brief update*. Just had a very busy week and about to head into a very busy month.

This has involved getting costumes ready for a fancy dress party where the theme was Pride and PreJEDIs (Regency, Star Wars and a few zombies for good measure). I rediscovered dressmaking. My mum trained as a dressmaker, and my childhood was full of treading very carefully around an assortment of material, tissue patterns and pins. Oh yes, the pins. I don’t actually remember mum teaching me to sew but it happened at some point. And I own a sewing machine. It’s 12 years old now and, as my followers on Twitter can attest, has taken on a vindictive life of its own and is determined to give me a nervous breakdown at this stage. But more about that later.

I called up to Mum, chatted about the party and asked if she had a pattern for an empire line dress. The clue should have been when my Dad started laughing. Yes, she has patterns. Lots and lots of patterns. Also material. And before I knew it I was off to make myself a dress. Only to find that the newly-vengeful sewing machine will apparently only sew things when it feels like it, and not AT ALL when my husband was in the house. (I have NO idea why). And then I got talked into making two Jedi outfits (rather easy thanks to this post  from DeGraeve.com – many thanks for that!) and a dress for dd as well. Dd, who knew very little about dressmaking, discovered the wonder of apparently Tardis-like fabric shops and pretty pretty fabrics. We had a bit of a bonding session on that adventure.  So a lot of the stuff was sewn, resewn, handstitched, and even Wunda-webbed but we got it all done in the end. When I have a photo sorted I will post it.

In the week I got a serendipitous invitation to an exhibition at Sotheby’s in Dublin where they were exhibiting Jane Austen’s ring (Article from Irish Times here) and a first edition of Pride and Prejudice in 3 volumes (DROOL!). There were also a collection of letters from Jonathan Swift (including the awesome one where he angles to be given a rather prestigious job on the grounds that the previous encumbent has already been dead for 36 hours!) and a silver cigarette case given by Agatha Christie to one of the men who found her following her disappearance. I love going to see things like this, particularly when they are up for auction. If bought by private collectors, it might not be possible to see them again. Even if bought by a museum, it might be one I’m unlikely to get to. So it’s good to go and have that memory, to say “yes I saw it, and it was fabulous”. It certainly was. I’m really grateful for the invitation.

We also went to the Chester Beatty Library on Saturday with the kids for one of their excellent Silk Worms club workshops. This one was on manga, with the lovely and talented Inko. The kids had a wonderful time, got a tour to see the Bamboo Cutter scroll and draw their own manga. We got to have a lovely coffee and then also view the Bamboo Cutter scroll, which is newly restored and absolutely stunning, and also a quick look around my old favourite exhibition The Art of the Book (seriously, could spend HOURS there).

Then it was home again to get ready for the party which deserves a post all of its own. It was a super evening. The kids bonded with some others and ran around playing, possibly turning slightly feral in the grounds of beautiful Killashee house, while we swanned around in full costume. A great night was had by all. Our “we’ll stay for a couple of hours if we can” turned into “it’s after 11pm, we really ought to take them home now, if we can catch them”. And I think we were the early leavers. Thanks so much, Jane and Stephen. It was super.

So now I need to get back to some writing. I will reply to some emails (sorry!) and then… then… we prepare for the Romantic Novelists Association Conference in Penrith and the ROADTRIP to get there. (Yes, it has be in capital letters, trust me).

At least, around here. So basically this is a little bit round up and a little bit apology. END_OF_DOCUMENT_TOKEN_TO_BE_REPLACED

The catflap arrived yesterday. It took a while to persuade the Patchwork cat to use it and not to (a) ignore it or (b) attack it. We may have succeeded. No one has seen the evidence as yet. However, he is getting into and out of the house without other doors and windows being opened for him so I think it’s clear.

He has discovered the art of teleportation.

Since he was determined not to be put into the conservatory and face the catflap last night (there are scratches on me–the type from scrabbling for escape rather than malevolence… I think) and to escape it this morning, he indulged in some expert camouflage I thought I might share with you. 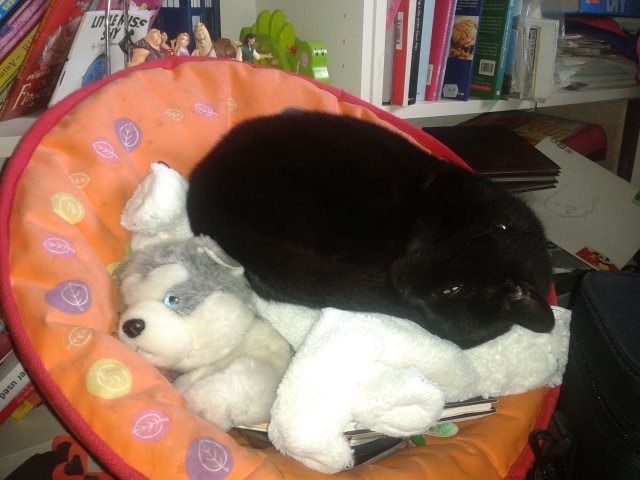 Clearly he is just another soft toy. Nothing to see here. Certainly no cats. Just cuddly teddies and a single baleful eye of DOOM… 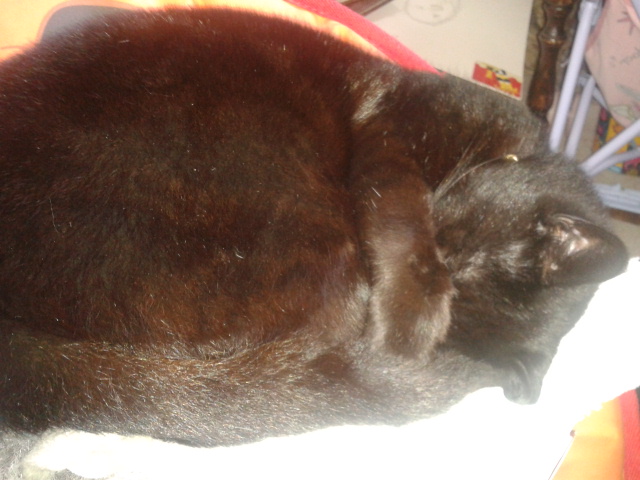 Nothing to see here. Kindly move along.

Teh Hoominz. How STOOPID dey iz.