So, things are ticking along here and for this St. Patrick’s day I am mainly vegging on the sofa doing edits following a lovely walk in Glen of the Downs. As a treat for you, here’s an excerpt from A Hollow in the Hills and a belligerent leprechaun called Art.

‘Don’t say anything, okay?’ he told her as they approached a stall staffed by a small red-haired fae dressed in a green hoodie, with the shiniest shoes Izzy had ever seen. ‘He’s a lep, and if they lose it there’s hell to pay.’

Jinx looked at her as if she’d never said anything so stupid in all the time he’d known her.

‘You saw them at the museum didn’t you? Cudgel and his mob? Did they seem jolly? Look, ever seen a poltergeist?’ She shook her head. ‘Well, anyway, doesn’t matter. He’s way worse.’

The leprechaun scowled at them and proceeded to shove more things into a backpack.

‘Where are you going?’ asked Jinx.

‘Puck’s Castle,’ he said. ‘It’s the only safe place. Something terrible is happening in this city and I don’t want any part of it.’

‘Oh, come on, Art,’ Jinx began, but the leprechaun glared at him, then stared at Izzy, as if noticing her for the first time. He shook his head, blinking and took a step back. Afraid. It was unmistakable.

‘You need to stay away. I don’t know what it is but it feels wrong and it all centres on you. On the two of you but mainly on you, Cú Sídhe. You’re all about Hollows, kith and kin, but we’re not. My kind, I mean. We’re solitaries, only tolerated because we’re useful and do the jobs the mighty Aes Sídhe don’t want to sully their hands with. When the shit hits the fan we’re first against the wall. That goes for all the wanderers, the outsiders, the ones who don’t belong. But listen, mate, the Cú Sídhe are usually next to get it.’

‘But why Puck’s Castle?’

‘Don’t you know anything? Puck’s Castle? Puck? The Púca, Jinx, king of the wanderers, lord of wild magic. First among us? Hell’s bells, Holly did a job and a half on you. Did she beat our stories from you? The Sídhe had their gods and we had ours. They’re all gone but they linger on. They can be called back. Sometimes. Some say they’re just sleeping under the earth or in a Hollow in the hills.’

‘Yeah,’ said Art, zipping up the rucksack and swinging it over his shoulders. It was almost as big as he was but didn’t impede him in the slightest. ‘And I’m off a bleedin’ cereal packet. There’s a lot of it about. Try to keep up, doggy.’

Just remember, they’re all dangerous. Even if they’re cute and grumpy.

Book 3, A Darkness at the End, is coming along and due out in September. I’m deep in edits. At the end of the month I’m off to Eastercon where I’ll be moderating the “True Love and Trophies” panel at 7pm on Friday. Should be great fun. 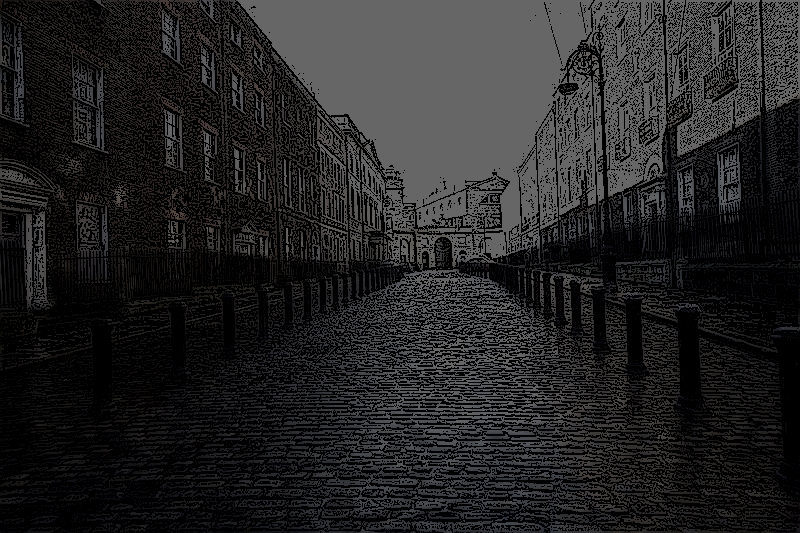 “Then everything else fell away to silence.

And the sound of the gentle rise and fall of someone else’s breath.

‘You shouldn’t be here either,’ said the voice called Jinx.

Strangely melodic a voice. So deep it resonated through her.

But not kind. In no way could anyone call it kind.

Izzy’s temper bristled. No, ‘are you okay?’ No, ‘did he hurt you?’ She scowled, searching for him in the shadows. Her vision drifted back towards normality. She could see again, almost. Blinking hard, she tried to focus on him.

Liar. She hurt all over. Not to mention the wound to her pride. What had she been thinking? Everyone knew not to chase thieves down alleys. Instinct was one thing, but what if he’d had a knife? What if he’d had friends?

A vague outline that had to be Jinx loomed over her. Big, broad. And scary, her instincts told her, a little too late to be of any use. This was so not the place to be.

Dropping to her knees she made an attempt to gather her belongings. There was some sort of sludge covering the notebook. She tried to wipe it off, but it clung on stubbornly. Scraping it didn’t work, neither did the crumpled tissue that she found with it.

The sob that tore its way out of her came as a complete surprise. Fat drops of water fell from her eyes and splashed amid the rubbish. Her things tumbled from her shaking hands, even as she tried to scoop them into her bag.

‘Here,’ Jinx said quietly, surprisingly gentle. She looked up to see a pair of long-fingered hands cupped in front of her. Masculine hands, but elegant, like an artist’s. They cradled the broken remains of her mobile phone. ‘It’s banjaxed.’

The apologetic tone made her look up sharply and the first things she saw were his eyes. Sharp as nails, one might say, and the same colour. Bright, shining steel piercing through the darkness. And not quite … normal …

His head tilted to one side, studying her as closely as she was studying him. She blinked and the world seemed to contract abruptly around her. The illusion shifted, like the shimmer of a heat-haze in high summer and suddenly his eyes were grey instead of steel. His pale skin was framed by strands of long black hair, silken and glossy. Her fingers itched to brush against his face.

His eyes tilted slightly, cat-like, smudges of guyliner giving their grey that curious metallic illusion. No, not a liner. Shadows around his eyes, cast by thick black lashes. Tattoos covered the right side of his neck, kissed the underside of his jaw and vanished beneath the tight black t-shirt he wore. They emerged again, trailing down his arms and she wondered where else they went. The thought of what lay beneath his clothes made her blush furiously. A nose stud winked at her, a silver ring pinched around one high and elegant eyebrow and a line of earrings ran right up the side of one pointed ear.

Not human, not real, she thought once more, like one of those crazy alien things in the films Dylan watched, or something inspired by her manga collection, like a stylised sketch, and the image shifted, normalising again.

Shock was making her see things. That was all. Or that concussion she probably had.

Or maybe just the potentially-fatal attack of stupid that seemed to be overwhelming her all of a sudden.

Still pierced, still tattooed, still unbearably handsome, but less … alien? She shook her head, desperate to clear it. Taking a deep breath didn’t help. She closed her eyes, tried again and found her heart pounding in her chest. She breathed past it, felt it calm and looked back at him. Normal. Everything was normal. Or as normal as it got when you were kneeling in a piss-stinking alley with a tattooed stranger.

All the same she didn’t take the pieces of the phone. If shock was making her see things, that was bad enough, but she was still on her knees with a guy who would give her mother apoplexy.”

The Treachery of Beautiful Things comes out on the 16th August, 2012. Which, as some people have pointed out, is a very long time to go. 168 days according to Book Depository! I’d be hard pressed to wait that long.

(We revealed it at the YALitChat livechat last night, but just in case you missed it.)

I’ve got an exclusive peek into the book right here on my website – the prologue and first two Chapters of TTOBT all there for you to read right now. Just click the link here, or use the menu above.  I’ll add more features to the section as time passes so check back every so often. Hope you enjoy it.

As part of a fun exercise by the Romance Divas, I’m taking part in Except Monday, a once a month excerpt-fest.

Below is an excert from The Scroll Thief: a Tale of Ithian, which features Halia and Trask. Beneath that are some links to some of the other wonderful excerpts available today.