And reveal the cover for my new paranormal romance which comes out next week (NEXT WEEK! EEK!).

The Mirror of Her Power is being released from Taliesin Publishing on the 5th June. It’s my first full on paranormal romance since Soul Fire and I’m really excited about it. Magicians living amongst us, desire and magic going hand in hand, steamy encounters, ancient enemies and untold wonders.

And all quite over-18s only. (sorry under 18s but you only have to wait a few months for A Crack in Everything, promise. And it will be SO worth the wait!) 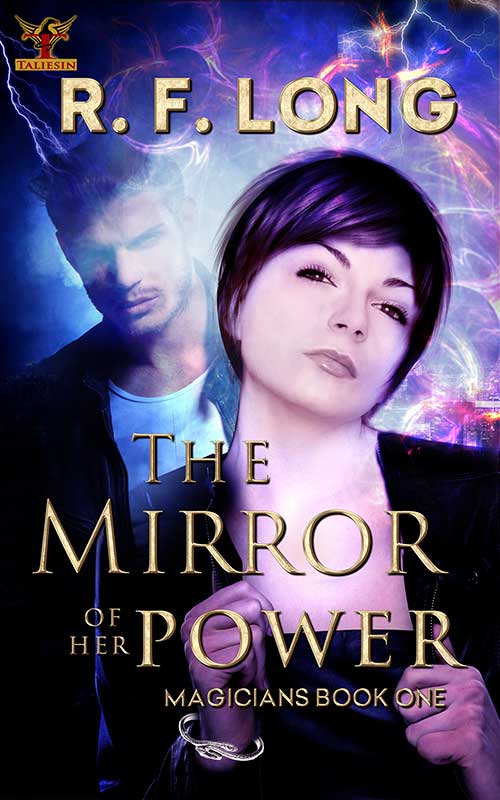 Magic and desire – the magicians are among us

Mia’s life as a bike messenger has a few perks, mostly the glimpses she gets of the hot and mysterious Balthazar. But while making a delivery to his home, a strange bracelet attaches itself to her arm and everything changes. Balthazar is a magician, and Mia is fated to be his apprentice.

Only Balthazar doesn’t want an apprentice. The last time he tried to share his life and his power with someone it ended in ruin. He won’t risk that again. But magic and lust are intricately connected, as are the fates of magicians and their apprentices. The desire that ignites between the two of them is more than he’s prepared for, and maybe it’s more than just desire.

When Balthazar’s former apprentice, a powerful and dangerous sorceress returns with vengeance on her mind, he’ll have to join forces with Mia, or risk losing her forever.

Along with his last chance of redemption.

I’ve always loved stories about magicians and magic and this particular story, characters and world just begged to be told. Even though I’ve been focusing on YA recently I simply could not shut Balthazar and Mia up.

Especially Emrys. Oh my goodness, he never shuts up! Wants his own book next. Cheeky boy.

The Mirror of Her Power will be available as an ebook from the 5th of June from Taliesin Publishing and all the other online retailers. As soon as I have the buy links, they’ll be up here 😀

Hope you love it as much as I do.

At Pcon I had the pleasure of being interviewed by Cheryl Morgan for Salon Futura, and that interview went live today.

We covered a wide range of subjects in my 20 minutes – my library day job, old books, paranormal romance, erotica (err… yes… *blush* I think you can actually see the blushing in the video), Soul Fire, The Scroll Thief, my Holtlands stories, Young Adult fiction and May Queen. Wiiiiiiiiiiiide range of subjects.

So a huge thank you to Cheryl. May we meet again very soon.