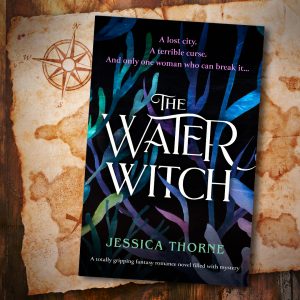 I’m so excited to share the cover for my new book The Water Witch. Set in Brittany, this tale of magic, adventure and romance is one I’ve wanted to write for a very long time. As many of you will know Brittany is a place very dear to my heart and it’s wonderful legends have always fascinated me, especially the legend of the lost city of Ys. I’ve visited the area so many times and hope I’ve captured some of the beauty and wonder I find anew here every time

The Water Witch will be out on the 5th August 2022, perfect summer reading. It’s going to be in print and on Kindle. You can pre-order it here.

Sitting side by side on the clifftop, he turns to her solemnly and says, ‘The water witch is real.’ She rolls her eyes and grins, teasing him. ‘Sure. A psycho mermaid. Got it.’ But now he’s gone forever… will she find the truth beneath the waves?

Brittany, France. Ariadne Walker’s fiancé Simon drowned in the stormy Atlantic Ocean doing what he loved: searching for the lost underwater city of Ys. Local legend says it was destroyed centuries ago when the princess of Ys became a water witch, cursing the name of the man who betrayed her.

Ari never believed these tall tales. And the letter Simon sent before he died finishing their relationship is a devastating secret she’ll take to the grave. But arriving in Brittany, Ari encounters a man emerging from the sea in a rocky cove, saltwater dripping from his dark hair. Rafael swears the legends are true: and his ancestor was cursed by the water witch. Now, his own life is in terrible danger. And the secret to breaking the curse lies hidden in the lost city.

When Ari finds a strange engraved mask on the sea bed, and a cryptic map amongst Simon’s things, she has no choice but to believe Rafael’s plea. Can they follow the trail and save Rafael’s life? Poring over the map by candlelight, the flickering flames only add to the heat between them… but will Ari’s fragile heart soon be shattered all over again? And will they ever find Ys and break the curse – or will the water witch demand another sacrifice?

An absolutely addictive romantic fantasy read filled with passion and mystery, that will sweep you away to the wild coast of northern France. Inspired by real myths and legends from this magical place, The Water Witch is perfect for fans of Luanne G. Smith, River of Shadows and Jennifer L. Armentrout.