Today marks the launch of A Flight of Thieves, a YA steampunk adventure by my good friend and critter David Bridger. So to celebrate I have the lovely cover and an interview!
Why am I excited about A Flight of Thieves? I’ve seen this one develop for a while now, had the privilege of reading the early drafts and it’s awesome. So is the cover! 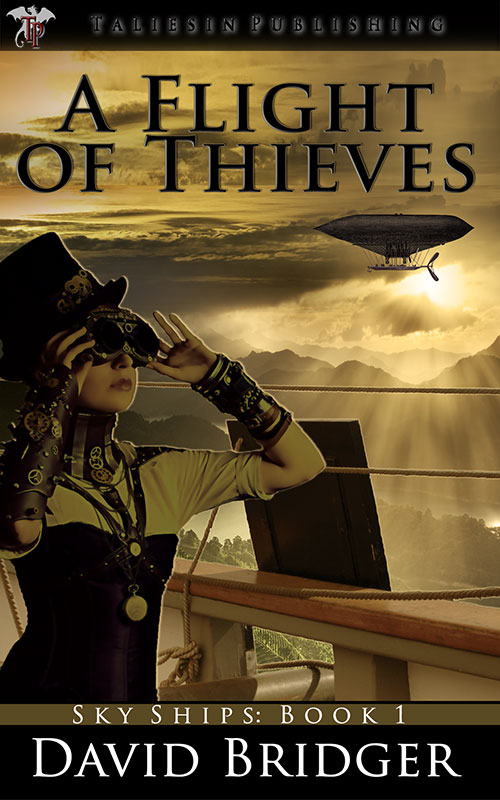 In a world of isolated island communities, a thousand years after Earth’s apocalyptic flood, Princess Victoria and her robot mentor, King Henry, recruit a ragtag band of airship adventurers to help her fight the military traitors who intend to murder her family and enslave the kingdom.

Victoria has spent all of her sixteen years in a secluded palace on Ben Nevis Island under the protection of King Henry, one of the three original robots programmed by the ancestors to rule the flooded planet Earth. She’s safe there, but her family and their intelligent clockwork servants treat her like the tomboy child she used to be—and sometimes still is. She yearns to fly away in one of the great iron airships to see the world.

It seems too good to be true when Henry asks Victoria to board the Royal Airship Elizabeth, with him disguised as her robot footman, and fly over the sea to meet the Lord of Ireland. Victoria jumps at the chance for an adventure and they take to the skies together. But the world is a dangerous place. Air pirates prowl trade routes, and slaver fleets cross the oceans to raid unprotected islands. The Royal Navy is building up to a war, and Henry’s old friend, the Lord of Ireland, is accused of giving safe harbor to pirates. Victoria and Henry must overcome them all in order to make their way home to a kingdom that might not still be standing.

So I came up with some questions for David, all about writing, this book and what his plans are.

When did you start writing?

I learned to read early and inhaled books as if they were oxygen, so it was the most natural thing in the world for me to want to be a writer when I grew up. But I wanted to do other things with my life too. Mostly, I wanted to go to sea. I still started writing my first novel at sixteen when I was still at school, but I didn’t have a clue what the story would be about and only got about halfway down the first page.

My next attempt came ten years later, while I was watchkeeping somewhere in the Arctic Ocean. Working conditions were rough and writing fiction was an escape from uncomfortable reality, but that one wasn’t much better that my first and it died at the end of its opening chapter. I wrote lots of other things. Mainly work stuff, with some articles and satirical poetry in my downtime, but what I was really hungry for was to be a novelist.

That started in earnest after I came home from sea, quite badly injured. It took me several years to regain mobility, and what stopped me from going mad during that time was learning how to write. I still inhaled novels, but now I was inhaling How To Write books too. The good, the bad and the ugly, I read them all. By the time I was sitting up in bed, I was writing my apprenticeship novel. By the time I was in a wheelchair, I’d finished its first draft. By the time I was walking with sticks, it was polished to a high gleam and I was submitting it.

Which writers influenced you the most when you were younger?

There were several, all of them superb storytellers, but I think the two most influential were Rosemary Sutcliff (The Eagle of the Ninth) and Alexander Kent (the Nelson’s navy Bolitho novels).

Which writers influence you the most now?

What inspired you to write this book?

A yearning for my old freedom of movement around the globe, transposed in my imagination to the skies on great steam-driven airships and the smaller, faster vessels of air pirates and adventurers.

What’s your writing routine? What do you need (or not need) in order to write?

My day starts early. When my world is ideal I do thirty minutes yoga breathing up on our roof garden around dawn. It’s the only part of our gardens our two big dogs can’t reach, so they can’t disturb my relaxed state with their curious wet noses. Zen’s a good way to start any day, but I have to admit I’m a fair weather yogic. Then it’s breakfast at the keyboard while I catch up with emails. Then I write. It’s a nice morning routine, but to be honest the only things I must have before I start writing is a glass of fresh orange juice and my daily jug of strong, black, Italian coffee.

Do you plan out your books in advance or write them as they come to you?

These days I don’t plan everything in detail the way I used to, but I do make a skeleton outline. Just as a rough guide and to know where and when the ending will be. I’ve discovered the joy of learning more about my characters and their worlds as we go.

Why did you change to writing Young Adult?

For the honesty and wisdom. I believe many of us are at our most honest and wise when we’re teenagers. Later on other stuff weighs us down and can make us forget, but it’s still there beneath the world’s nonsense and when it shines out it’s what I enjoy most about myself and others. I like and respect that in my readers.

Great iron airships! Steam engines! Sky pirates! Intelligent robots! Adventure! Brass and glass and leather and lace! An untamed world and the freedom to explore it! What’s not to love?

If you could only have one CD on repeat what would it be?

Melody Gardot’s My One and Only Thrill

Do you have any other projects in the works?

Yes, several, and all of them YA. I have a trilogy of space opera novellas coming out this winter, the first of which is scheduled for release in December. I’m working with Dayna Hart, my lovely Taliesin editor, on Gifted, which is a neo-gothic timeslip fantasy. Then there are two more novels lined up, one epic fantasy and one science fiction story that Lea Griffith and I plan to co-author. Then it’ll be time for the next book in the Sky Ships series. Wow. Looks a lot all listed in the harsh light of day like that, doesn’t it? I’d better start writing. J

Thanks David. So glad to have you visit the blog. And I couldn’t agree more on the airships!!!

David Bridger settled with his family and their two monstrous dogs in England’s West Country after twenty years of ocean-based mischief, during which he worked as a lifeguard, a sailor, an intelligence gatherer and an investigator in the Royal Navy. He writes science fiction and fantasy for teens.

A Flight of Thieves is available from Taliesin Press, and for launch day it’s reduced by a whopping 25%! Go and buy it now!

9 thoughts on “Happy Release Day: “A Flight of Thieves” & an interview with David Bridger”